I’ve been given to reflection lately. Probably the result of my mid life crisis.. I’ll be writing about that soon. Anyway I’ve been wondering what I really feel about the Ikemba.

Its so unacceptable for any Igbo person to criticize him. You are less Igbo if you do. He was the Igbo hero. The only one that stood up for the people when they were being slaugthered.

Awhile back a woman that dared point out the atrocities of the civil war he fought was roundly attacked online.

Can the Igbo’s ever be objective about the Ikemba and the civil war? As a child of Igbo-Nigeria I grew up in the 70’s with proud tales of the war. I also grew up surrounded by the damage.

The many that didn’t come back. The obvious signs of post traumatic stress disorder among those that did. The war widows and the war orphans.

What the Igbo-Nigerian has achieved in the decades since despite the blatant restraints is nothing short of an economic miracle.

As the Ikemba comes home to rest I am put to mind of the indomitable Igbo-Nigerian spirit. The spirit of the fighter, the warrior that will survive and flourish against all odds.

This morning I read an article in the Economist online about the too few war novels from Africa. The Biafran civil war wasn’t one of them. There is a lot written about it.

The author took Tolstoy’s “War and Peace” to relieve the idleness of waiting gor Africa’s big men to move writes about the war lord turned politician he was covering:

Another lesson of “War and Peace” is Tolstoy’s notion of causation in history. “Historians have assumed that events depend on commands,” he writes in the epilogue. But upon further examination, “we have found that historical characters and their command are dependent on the event.”

Could it be a statement on the Ikemba too? Was he nothing more than the pawn of events? Or was he a rash and impudent young soldier that led his people to slaughter. That of course is for each woman and man to judge.

He was a rallying point for the Igbo-Nigerians. Their ethnic and epic hero in a land and among peoples that privilege and proclaim their men of war. 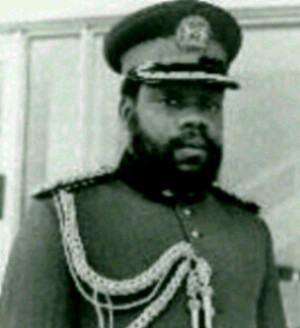 Came across an interesting tit bit while reviewing the Nigeria Film and Video Censors Boar Act 1993 for a totally different assignment.

Distribution of an unclassified video is an offence under S.56 of the Act. The video of the ABSU rape and its distribution falls within the interpretation.

I read it was possible to trace the source code or IP or something really technical like that. Or has too much time elapsed?

We could put them away for 3 months and discourage the nasty trend of rape video. And it could lead to the culprits.

I’d really like to know the thoughts of my legal and technical colleagues.

According to Blacks Law Dictionary ‘alimony’ is an allowance paid by one spouse to another by order of  a court for the maintenance of the other spouse while they are separated, during divorce proceedings or after they are divorced.

Alimony comes from the Latin word ‘alimonia’ which means sustenance and derives from the common law right of a wife to material support by her husband. In other words it was essentially payable only to a wife. The courts have tried to draw a distinction between maintenance and alimony but this distinction would only apply in jurisdictions where both terms are retained.

The Nigerian Matrimonial Causes Act of 1990 does not mention ‘alimony’ and uses ‘maintenance’ to describe payment of an allowance to a spouse during or after a divorce. While the two words are sometimes used interchangeably by the Nigerian Courts it is recognized that they refer to the same thing. The legal principles governing assessment and determination of alimony also apply to assessment and determination of maintenance and the courts have so held in a number of cases.

Under  Part IV of the MCA  a court can make an order for maintenance for ‘a party to the marriage or of children of the marriage’ suggesting that a maintenance order could potentially be made in favor of the male spouse and a mother could be ordered to pay maintenance for children. It could be considered quite progressive that Nigerian matrimonial law has removed a common law distinction that reinforced women’s lower status.

Nevertheless when reference is made to maintenance orders the assumed beneficiaries are usually the wife and children of the marriage. It would be interesting to see what the courts would decide if a husband petitioned for maintenance from a wife in a divorce proceedings.

While the court has discretion in granting maintenance orders there are nevertheless clear principles for the assessment of maintenance. The court  in  will consider  means and income of the parties,  their financial obligations and responsibilities, their  standard of living, the age of the parties, ability to work and any disability and the contributions of either party to house and family  care.

These principles have been upheld by the Nigerian courts in a number of cases.

Maintenance will not normally be granted if the spouse claiming maintenance has sufficient means and income to maintain him or herself, so the petitioners or applicants earning capacity will be a relevant factor in determination.  In a 1974 case the court held that the purpose of maintenance was to ensure that the wife in this instance was able to live approximately in the position to which she had been accustomed to before her petition for divorce was brought before the court.  Maintenance like alimony is not supposed to be punitive.

Whether maintenance is permanent (that is till the death of either party) or temporary has been decided based on age, education, occupation etc. In one case where the wife was in her 60’s the court granted a generous award for the rest of her life based on the fact that she was already too old to work or be optimally productive.  Maintenance orders have also been granted on a rehabilitatory basis that would support a spouse through a transitional period.  Most maintenance orders terminate on the remarriage of the spouse granted the order since the presumption is the maintenance is no longer required.

I have of course been referring to spousal maintenance; children of a marriage are entitled to maintenance till they are 21 yrs old and the court makes separate orders for each type requested.

In addition to maintenance orders Nigerian courts also have discretionary powers to make orders for settlement of property of the parties to a marriage as the court considers being just and equitable.  The Nigerian Court of Appeal has held that evidence of joint purchase or development was not a prima facie requirement in settlement of property and that the only limitation on the court was to consider what was just and equitable.

Women have applied and been granted settlements of matrimonial property by Nigerian courts and a creative lawyer can make a persuasive argument to the court  and use a growing number of legal precedents to ensure a court uses its discretion wisely to protect the economic rights of men, women and children during divorce.

He finally took the plunge My junior son recently got married while I was away to #FixPolitics in Nigeria. Congratulations to the cute couple as they embark on the rest of their lives Nothing but love 💜💜💜💜💜💜
@LoloCynthia my baby sister. Adaku. Nwa Nwa Agwubuo. Setting the world ablaze. She was recently chosen as an Aspen Fellow for her work on sexuality. You may know her as Lolo Speaks. She was in Nairobi recently for their first meeting. And she is already causing an uproar. She posted a tweet about ear piercing & heres what happened, in pictures. The response to her tweet has been staggering. The comments ehn. The next generation of African feminist leaders. So proud of her. You should go check it out on Twitter. #MyBodyIsMine #LoloSpeaks #Afrifem #AfricanFeminisms
Repost Dr. Amie Harwick @dramieharwick Rest in Power #endvaw #violenceagainstwomen violence
Dinner with @ginainuumoru Roast pumpkin soup with parsley oil dressing Chicken roulade with carrot puree & potato gratin garnished with tuile Vanilla panacota with strawberry coulis & date pudding with caramel & meringue Friday night in Abuja